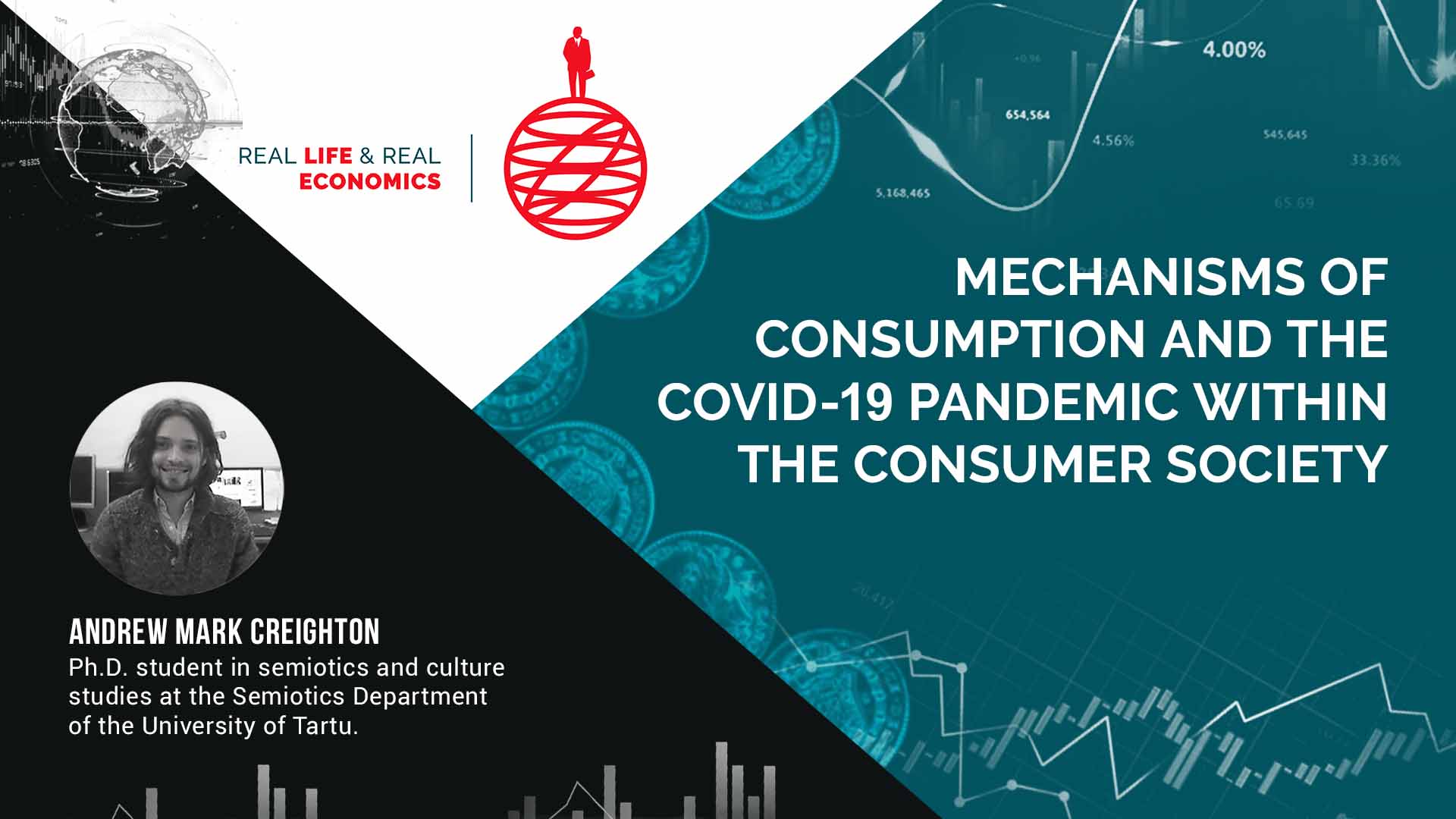 Andrew Mark Creighton,
Ph.D. student in semiotics and culture studies at the Semiotics Department of the University of Tartu.

The longevity of consumer society in general have been a major theoretical and practical area of inquiry, in one form or another, over the last and this century. However, a quick overview of literature on consumption and formal rationalization (McDonaldization) shows that consumer society has a number of mechanisms that allow for it to maintain consumption. David Riesman, Nathan Glazer, and Reuel Denney (1989) demonstrated a socio-cultural mechanism that at once maintains high levels of consumption, while also preventing overspending (ensuring consumers can continue consuming into the future):

The consumer today has most of his potential individuality trained out of him by his membership in the consumers’ union. He is kept within limits on his consumption not by goal-directed but by other-directed guidance, kept from splurging too much by fear of others’ envy, and from consuming too little by his own envy of the others. (Riesman, Glazer and Denney, 1989, p. 79).

Further on this point, George Ritzer (2019) — Chris Rojak (1993) also discusses this — argues that the means of escape from McDonaldization and consumption have been rationalized, so means of experiencing the world, free of consumption and formalized systems, now require engaging with both (i.e., fishing requires a fishing license and complying to various regulations, as well as consuming fishing equipment). Stjepan Meštrović (1997) argues that emotions themselves have been McDonaldized, and as such transformed to maintain and facilitate consumption: meaning our social and personal emotional interpretations of reality have been socialized and culturalized to enforce consumption and rationalization. The spectacle, according to Guy Debord (2005), completely dominates perceptions of reality. A network of social relations mediated through images, the spectacle within society “[…] presents itself simultaneously as society itself, as a part of society, and as a means of unification. As a part of society, it is the focal point of all vision and all consciousness.” (Debord, 2005, p. 7). Ultimately, the spectacle justifies consumption and production. Jean Baudrillard demonstrates quite heavily, how consumer societies makes use of a number of mechanisms to further consumerism indefinitely. The simulation of nature for instance, being quite like Debord’s spectacle, demonstrates how the restructuring of nature, for the means of consumer functionality, facilitates an illusion of nature, as such it is a misperception of influences of consumption. In other words, consumer nature is presented as being true nature, while it is actually a heavily regulated and socially and culturally structured simulation of nature. The implosion of formally differentiated spheres within society also facilitate consumption, seemingly continuously. As Baudrillard states:

What affects the meaning of the works is the fact that all significations have become cyclical. In other words that, through the very system of communication, a particular mode of succession and alternation has been imposed upon them, a combinatorial modulation which is precisely that of hemlines and television programmes (cf. below, `Medium is Message’). And also the fact that, given this situation, culture, like the pseudo-event in `public information’, like the pseudo-object in advertising, can be produced (and virtually   is produced) out of the medium itself, out of the code of reference. (Baudrillard, 1998, p. 102).

This stems from production and work, that:

The decisive factor is not whether millions or only a few thousand partake of a particular work, but that that work, like the car of the year, or nature in parklands, is condemned to be merely an ephemeral sign because it is produced, deliberately or otherwise, in what is today the universal dimension of production: the dimension of the cycle and recycling. Culture is no longer made to last. It keeps up its claim to universality, of course, and to being an ideal reference, doing so all the more strongly for the fact that it is losing its semantic substance (just as Nature was never glorified quite so much before it was everywhere laid waste). (Baudrillard, 1998, p. 101).

Ultimately this implodes the meanings between objects, organizations, etc., allowing for the continuous reuse and restructuring of consumer goods and products. So, based on the above works it is quite evident consumer society has developed quite effective, controlling, and invasive, yet often happily accepted according to Meštrović (1997), means to further consumption and consumer society. However, can a disaster disrupt and end consumer society? An intuitive answer would be yes, if the environmental conditions created by a disaster disrupt the means of production and consumption, such a society would end. However, the reliance on the image within consumer society, and the logics of consumption, means that such aspects of consumer society ‘live’ within our habits, logics, emotions, myths and cognitions, and as such can survive the destruction of economic systems. Moreover, the proliferation of consumer logic within written, digital, and other forms of recorded media, means that such consumer logic has the potential to survive even the destruction of humanity. Though this is verging on science fiction and, a more recent disaster, the COVID-19 pandemic, is a much better phenomenon to examine here, regarding its influence on the continuation of a consumer society.

However, first, let us look at how contemporary consumer society, in some regards, takes its current form. For many of us, — expectedly over the last few pandemic ridden years, though this has been an increasingly prevalent trend more or less globally for the past three or four decades — we have seen that society is increasingly reliant not only on online consumption and production, but the production and consumption of online virtual artifacts (e.g., video games, material within video games, art, online real-estate). These artifacts, materially speaking, are relatively inexpensive to reproduce, and in some cases to make. Moreover, in many instances such artifacts can be copied or replicated an indefinite number of times, but these actions are restricted and policed to create an illusion of scarcity to facilitate further consumption. This takes Baudrillard’s discussion about the image and logics of consumption to an almost complete idealization, as once the object, in its material form — while subordinated to the image — still existed in one physical form or another, even as a simulation. While now, the image in a sense, is all that is left, and the physical has been rendered to memory on a computer, or even a cloud. This mechanism of producing objects in computer and online space, could, theoretically at least, prolong consumption for an indefinite amount of time, and into periods of true scarcity where the abilities to consume more physically tangible based goods is difficult or even impossible. Further on this point, Ritzer (2005) has noted that consumption and production have entered the domestic sphere, and that our homes have become areas targeted by advertisements, and places to purchase products. However, consumption and production have penetrated further into our personal spheres than that, they have entered, as Alfred Schutz and Thomas Luckmann (1973) would term it, the everyday life-world and the natural attitude, and perhaps even other spheres of our finite understandings of reality (i.e., how many people check their phone in a haze of sleep? Buy products through an online store while inebriated at a pub? Browse online boutiques in between paragraphs while studying?). Thanks to mobile devices, we view and interact as consumers on an almost continuous bases, we have accepted these implosions and consumption into almost all areas of our personal and professional lives, and perhaps take these relationships as for granted, in fact, Ritzer (2005) argues many of us personally think of them as beneficial.

The pandemic in many ways has forced us into these new means of consumption. Where over a period of almost two years, we experienced on a collective level, the implosion of almost all our social, cultural, and economic spheres into the function of computers, the internet, and online spaces. This has resulted in our reliance for almost all of our needs, desires, and wants, to be focused through the medium of online spaces, resulting in a proliferation of consumption through these spheres; this includes forms of more traditional consumption being facilitated through the internet (online food ordering, shopping for clothes, books etc.) or the consumption of purely online artifacts (games, art, etc.), or communication and labor (Zoom, Microsoft teams etc.). So, it is apparent that technological innovation within more contemporary consumer societies has reached a level where the physical aspects of consumer goods, in many cases, almost entirely relates to the image and logic of consumerism itself. Though of course, you still need computers, tablets, and mobile devices to access them, however Baudrillard’s thesis still remains firm in these instances. When the recent(current) pandemic is considered, the effectiveness of consumerism in maintaining itself and continuously facilitating consumption also becomes apparent, as I will demonstrate below, consumption continued to thrive during this global tragedy.

Concluding, it is apparent, as Baudrillard discussed, that consumer society’s reliance on the image and logic of consumption, allows for a removal of the object, or relationship in the above examples, to the extent that they can exist almost entirely as an image, and the object can be in large part be removed or reduced. This allowed for the furthering of consumption during the COVID-19 pandemic, by facilitating consumption within online spheres, while also continuing the consumer society by allowing for further areas of experimentation and growth for the new means of consumption; ultimately continuing consumer society. Online technologies and interactions, within the confines of consumer society have allowed for consumer society to not only survive, but to continue to develop, flourish, and further entrench itself into our everyday lives. This makes it extremely difficult to determine when the consumer society will exist out world, as seen with the COVID-19 disaster, this system has strengthened in many regards and has become more tightly woven it into our lives.

O’Donoghue, J., Singh, G. and Green, C. (2004) ‘A comparison of the advantages and disadvantages of IT based education and the implications upon students’, Interactive Educational Multimedia, 9, p63-76.

Schutz, A. and Luckmann, T. (1973) The Structures of the Life-World Volume 1. Evanston: Northwestern University Press.