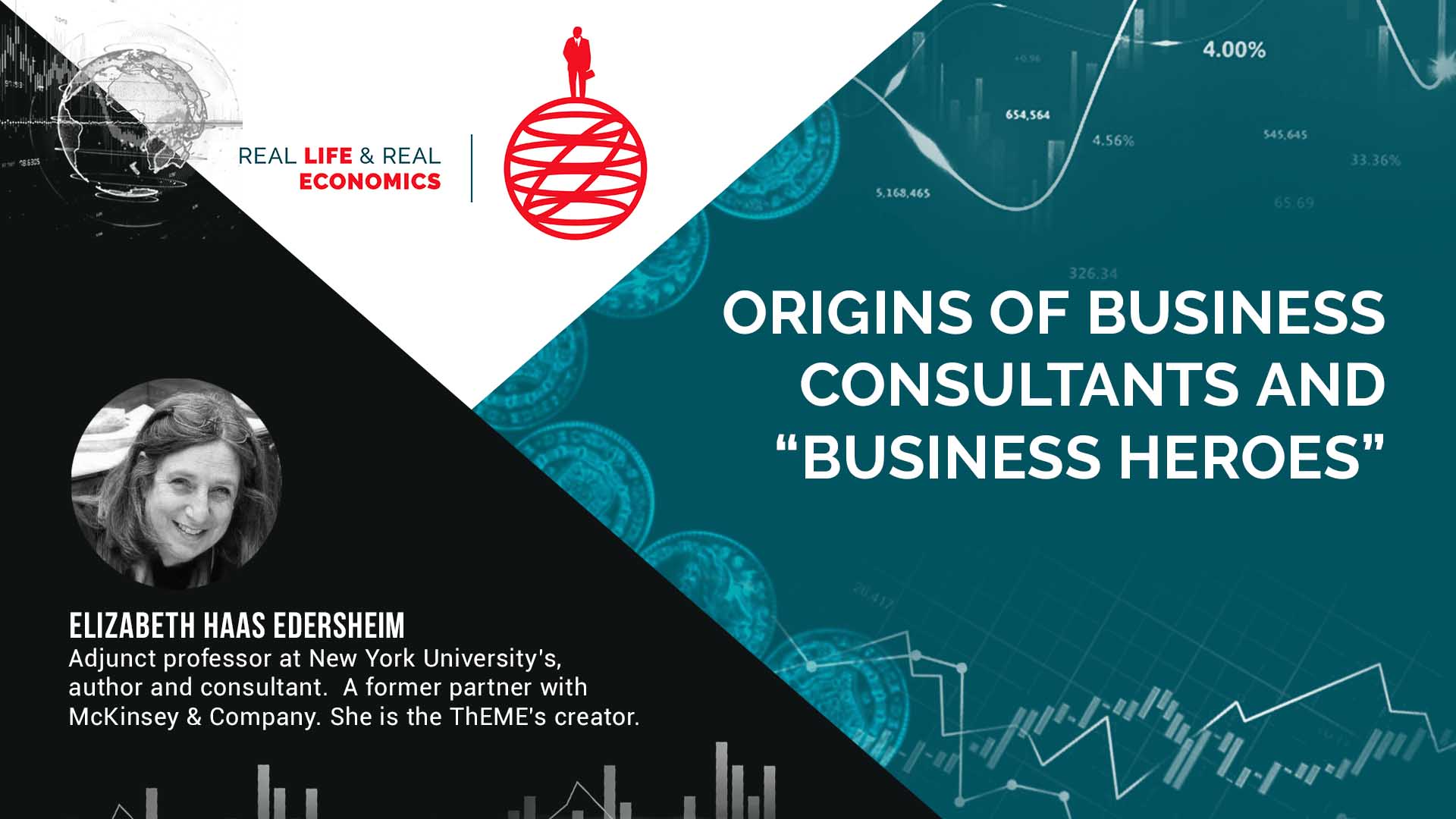 In this paper, I am going to focus on the business consulting field. We first have to define what a consultant is. A consultant generally works independently or with little supervision for a larger firm. The consultant has to be successful; he has to be trustworthy and be brought differently. A consultant is not a person who just gives advice. It is about being an agent of change, a coach, a thinking partner, a problem-solver, project manager, and a recruiting adviser (supplementing headcount). If we go back in time and begin to think about how management consulting emerged. We can reference Peter Drucker.  In 1850, the largest company in the world had 300 people ( the only exception being the East India Trading company) management was unknown.

In 1886 the first firm in the world to use “management consulting” in their name was Arthur В. Little. It was a spin-off from MIT, and they were a time management specialists and specialists in engineering. Up until 1890 there were no big names in management consulting. However it was not until 1914 that Booz from the Kellog School in Chicago and Allen launched an advisory firm James McKinsey, who was at the University of Chicago, launched McKinsey in 1926. It was about accounting, bookkeeping, and they had specialists.

Armour & Company was McKinsey’s biggest client in 1923. They wanted budgetary controls, so they managed the numbers. I’ve written about Marvin Bower and Peter Drucker, and I share their opinion of management consulting today. Marvin Bower was a lawyer in Cleveland during the Great Depression, but he was the only one who also had an MBA. He was on the advisory committee to all the bankrupt companies in the Great Depression. He said that presidents of TRW or any of these companies aren’t dumb. The Great Depression happened not because of their lack of knowledge, but because knowledge inside the firm did not go to the CEO. Marvin would go to talk to the CEOs, presidents, and vice presidents, but couldn’t find an answer. When he went out to the field, he would find the answer.

People in the field working with customers knew what was happening, but they didn’t tell the CEO. Hence, he believed there was a real need for an outsider to come in and begin to help break hierarchies. Comparably, Peter Drucker saw what the Great Depression did to Europe: when the economy isn’t working, this can give rise to something like the advent of the Nazis. That is,  because when nothing works, people use anything they can reach. The economy has to work for society. People have to feel good about what they’re doing. With that drive, there has to be an understanding of the behavior inside organizations. Not much has been written about this. He forced people to think by asking questions.

The next big firm is the Boston Consulting Group of Bruce Henderson which was founded in the mid-60s. Henderson saw a need for strategy and different thinking. While this was going on, Booz Allen and McKinsey began to bring in not experts but smart people who could ask good questions and help somebody to think. So a lot of things evolved in the industries.

One of the best consultants is Roger Martin, the dean in the Toronto School of Management who worked with Procter and Gamble and Best Buy. He believed the role of a consultant was to be a “thought partner” for CEOs.  Like an employee doesn’t want to advise the CEO, it’s hard for a CEO to ask for advice sometimes.

Because anything they say people take literally and go to do. Having a “thought partner” that they can think with is a great facilitator. Consultants outside management were trusted and they helped make organizations better. What is needed today is different from what was needed five or ten years ago, but there is still a need for effective consultancy.

Business heroes change our expectations about what business can do in a good and healthy way for humanity. It could be anything: from Andrew Carnegie, who changed the approach in the steel industry, to Thomas Hussey, who changed the way we bought our shoes. These business heroes can be found in many countries, but my examples are centered on North America.

The first business hero is Andrew Carnegie, who came to the USA from Scotland with no money and died as the richest man in the world. But he didn’t create the steel mill to achieve that. He saw opportunities to put things together in ways other people didn’t, and he also believed in unions. As an early pioneer in the business world, he believed that the people he got would be better than he would be at doing the work. It was not a common way management was done during those times.

The next hero was George Eastman, who failed so many times and at the same time did so many inventions but never adhered to any constraint. In 1894, he hired a woman to be his chief engineer, which was unheard of for those times, she actually made the difference in  developing the camera.

Henry Ford changed our sense of what could be delivered to everyone. Thomas Watson was probably the first business person in America who thought not of the next generation but the generations after that. He wasn’t just a great salesman; he founded IBM and left it six months before he died. In 1926 Watson said in his speech that the business has a past which they’re proud of, but it has a future that will go beyond lifetime. It has a future for the sons and grandsons and great-grandsons because it is an institution, not just an organization of the men that are here. It changed people’s sense of what an organization’s responsibilities were. Hence, he was a hero of mine.

Robert Noyce co-founded Intel and began what today is called Silicon Valley. He came from another firm, but he and his partner didn’t break laws, didn’t adhere to laws; they made laws. As Peter Drucker said, the best way to predict is to create. He created laws about how much data you can get on the chip and how fast it would grow. He created a concept that continues to be about breakthroughs.

My next hero is Frances Hesselbein; I spoke with her recently, she is 105 years old now. In 80s basically turned the girl scouts of America around. This organization was declining fast and had old principles, and she came in at the age of 65, never having run anything as CEO. She said that the first thing they have to do is provide an opportunity for every girl to see herself here. “Can they do that? No. How come? Let’s make it.” She said that leaders need to feel important. So they decided to get them trained at Harvard because girls need to feel they matter. We need to have the right badges. It is about the future, not about the past. So consequently, the organization that had been declining for eight years was turned around. Frances Hesselbein was the first woman on the cover of Business Week. Richard Kavanagh of Harvard would say the most important is that she was the first nonprofit leader that Business Week put on the cover. It changed how people thought about nonprofits that one could be talented and go into the nonprofit world. She did all of that. Her most recent book is titled “Work is love made visible.” It very much describes her sense of what we do, and so many people have followed her.

More recently, some of my heroes who have changed things were Paul Polman, who led Unilever. In his first week on the job, he went to the board and said, “We’re not going to do quarterly financial reporting anymore”. And when he was asked why he did that the first week, he said, “If I waited for the second, they would fire me.” He changed the norm about what they were doing and why they were doing things. He brought in a whole different sense of sustainability and the future.

Hubert Joly, who ran Best Buy, did that very recently when he said (58:30) “Price is the table stakes you bring in a price from Amazon will match it. What we need to do is empower employees so they can service.” So he created the Geek squad that went to your home. And one of his favorite stories to tell is about the employee who saw a four-year-old boy. Boy was crying because he lost his dinosaur, so the employee gets on the floor and starts helping him find it because he was making his customer happy, not because he was selling. That’s what Best Buy became.

Steve Jobs, Elon Musk… there are plenty more heroes. But for me, heroes are people that see business as their vehicle but not their purpose. Instead, their vehicle is to serve and to make the world a better place, and they do it in a way that changes our expectations.