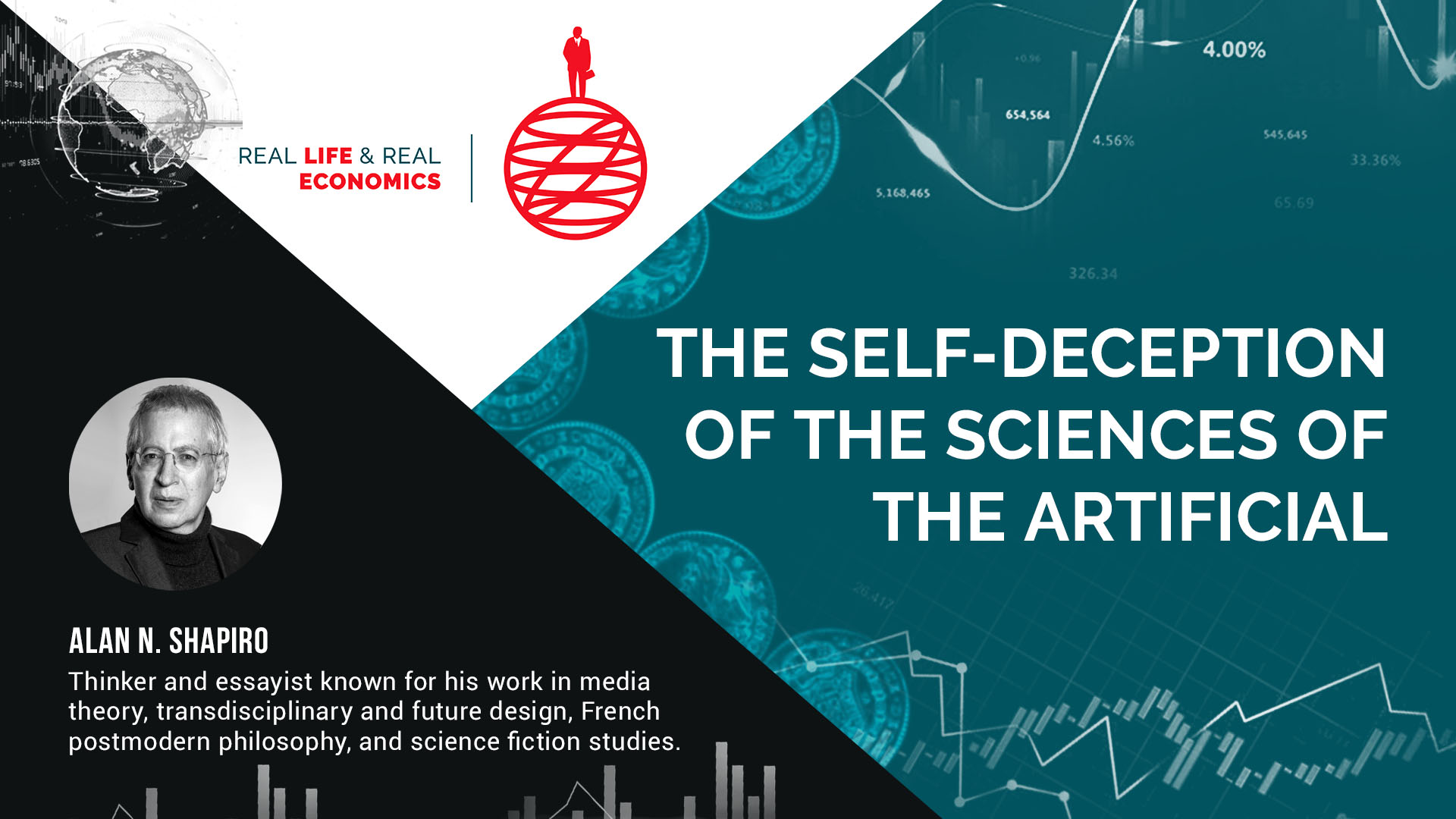 Alan N. Shapiro is a thinker and essayist known for his work in media theory, transdisciplinary and future design, French postmodern philosophy, and science fiction studies.

How can we redirect ideas from the philosophy of science (which has focused in the past on physics, chemistry, astronomy, biology, earth science, etc…) to interrogating computer science and economics or what Herbert A. Simon called The Sciences of the Artificial – as opposed to sciences which study natural phenomena? Is computer science a science? Is economics a science? Let us consider the milestone 1969 book The Sciences of the Artificial by Nobel Prize-winning economist and professor of computer science and psychology Herbert A. Simon.1  What is fundamentally and pragmatically at stake in the question of the sciences of the artificial? The stated mission of modernist science was to discover the true nature of reality via the scientific method of hypotheses and their experimental testing, empirical observation, rigorous skepticism, inductive and deductive reasoning, and the forming of community consensus among peers. But the realities about which scientists sought the true nature were domains of inquiry that existed prior to the advent of humanity, are part of the world or universe as given by the world/universe, and/or are exterior to man’s contemplating mind: the physical sciences and (somewhat paradoxically) the life sciences (anatomy, biology, botany, ecology, neuroscience, virology, etc.).

What would be the epistemological status or self-understanding of a science when its domain of inquiry is an artificial artefact such as the computer which is an invention of humanity? It is not necessarily a technological invention (it is more axiomatic than that). Or perhaps – when all is said and done – the computer is indeed a discovery of some objective reality that was always already and inherently existent?

Simon was a professor for five decades at Carnegie Mellon University, one of America’s most elite and important technology institutes of higher education. Simon won the Nobel Prize in economics and the Turing Award, which is the most prestigious citation for achievement in computer science. Simon’s work was highly interdisciplinary, ranging from economics and psychology to Artificial Intelligence and the study of large organizations and complex systems. In his book The Sciences of the Artificial (a pioneering work first published in 1969, then subsequently revised in 1981 and 1996), Simon does not seek to formulate any fundamental philosophical definition of the array of sciences which study – to invoke his terms – the man-made as opposed to what is given by nature. He is rather oriented towards searching for ways to pragmatically identify the characteristics of the artificial sciences. His approach is thoroughly imbued by American pragmatism.

What makes some phenomena and systems artificial, according to Simon, is not only or primarily the fact that they come into existence through artifice, design, engineering, or other human cultural activities, but rather the pragmatic and operational circumstance that they interact with their environment. This quality of the objects studied by the sciences of the artificial continually engaging with their environment renders them much more dynamic and changeable over time than the respective phenomena studied by the natural sciences. It is thus more difficult to make statements about these synthetic entities that remain valid for a long duration of time and which contribute to knowledge. The contingency and malleability of artificial phenomena, according to Simon, are due to their deep and continuous involvement with their environment, in contrast to necessity – a chief property of natural phenomena which exist in a subordinate relationship to the power of natural laws. This basic difference has unfortunately often led scholars and thinkers to mistakenly regard artificial materials and systems as not “falling properly within the compass of science.”2  The challenge that Simon sets for himself is to pinpoint exactly how can one make valid empirical propositions about things and systems which behave varyingly in their constantly changing circumstances and whose behavior might be different if observed at a different time.

According to Simon, the problem of artificiality – which affects many disciplines extending from economics, management, and information processing to education, engineering, and the cognitive psychology understanding of thinking and problem solving – is also due to the normative character of the objects inquired into by these fields. These sciences are concerned not only with “how things are but with how they might be.”3  There is some sort of ethical, political, economic, or purposive-rational goal involved in the coming-to-be and performance of the investigated occurrences. For this reason, Simon elevates design as central to his framework. The mission of creating a science of the artificial is inseparable from the task of creating a science of design. Design is the key to grasping and making interventions into how complex systems abide in complex environments.

In her 2009 book Simulation and Its Discontents, MIT professor of the social study of science and technology Sherry Turkle reflects on the transformations in scientific, engineering, and design education at MIT that occurred when computers and software were introduced to all fields of study in the 1980s and 1990s as major and intensive components of the learning curriculum.4  Turkle concludes pessimistically and with regret that many thinking skills and significant aspects of knowledge were lost in the training of scientists and professionals when all disciplines came to increasingly resemble each other in their shared emphases on simulation and visualization. The way of working – without computers – of older professors who were retiring was more direct and less mediated. Simon, contrary to Turkle, sees the computer as being a fantastic development for its stimulus of interdisciplinarity. He praises “the growing communication among intellectual disciplines that takes places around the computer.”5  The computer becomes the tool par excellence for transdisciplinary design. Simon writes: “All who use computers in complex ways are using computers to design or to participate in the process of design.”6 In his vision of the inter- or trans-disciplinary, there is no place for the abiding value of the mono-disciplines.

What is important about artificial systems for Simon is their goals, functionality, self-organization, normativity, capability to adapt to new circumstances, and their orientation towards how things should be. The artefact is performative in its interaction with its environment. Simon sums up his position with the concept of interface. There is an interface or meeting point between the inner organization and the outer environment of the artificial entity which underlies its design or intended purpose. Simon asserts that the conceptual framework that he is advancing has the benefit of being predictive. Insights into the goals and behavior of the artifice and its manifestations enable an anticipatory advantage in foreseeing what is going to happen in the future. He cites the state of homeostasis in biology (the steady internal conditions maintained by living systems) as an example to support his thesis.

Simon recommends conceptually establishing an invariant relationship between inside and outside for heuristic purposes, isolating the inner system from its outer environment in a temporary bracketed way. The interface between inside and outside should be designed simply and elegantly, therefore strengthening its qualities of powerful abstraction and general applicability. The priority of interface then leads to the potency of simulation. Once we have a clear and forceful comprehension of what the interface is, then that interface can be simulated “as a technique for achieving understanding and predicting the behavior of systems.”7 The computer, with its ability to simulate and model and try things out over and over, becomes the ideal tool for the sciences of the artificial.

Simulation, according to Simon, can provide amazing amounts of new knowledge. Software can imitate human behavior in a wide variety of domains, provided that an algorithmic description of the given behavior is available. He writes: “No artifact devised by man is so convenient for this kind of functional description as a digital computer.”8  It is the ideal device for the empirical social sciences, the exploring of the consequences of alternative independent variable values and organizational assumptions. The design of software, according to Simon, is a very behavioral process. The software program is a logical arrangement of symbols to be manipulated by a program-control component (a Turing machine). In any purely design or conceptual phase of the software development cycle, not much can be known about how the software is really going to behave. You build the software and then you see how it behaves. Things becomes known only in the doing, in the trying out, in the observing of what happens when the software is up and running and interacting with its environment.

Herbert A. Simon provides an empirical methodology for the unification of the social and informational sciences. Jean Baudrillard provides a poetic sensibility for a change-the-world post-science. Simon wants predictability of the entire artificial world-ambience. This is the gist of what we learn at universities in the social and informational sciences. What would a different intellectual culture that would take an alternative and more poetic approach look like? Could a poetic approach become a post-scientific paradigm? Against the empirical methodology and the will to systematization of a scholar like Simon, Baudrillard offers the alternative of poetic resolution – to make both the natural and man-made worlds intelligible based on perception of their enigmas and unintelligibility. Simon’s argument is a visceral, inaugural, and highly influential rejection of any philosophical approach. He is interested in the acquisition of useful knowledge for the scientific management of that simulation model that we call society or the social world. It is one giant roadblock set up to dissuade us from asking the question: how can the philosophy of science be applied to computer science?